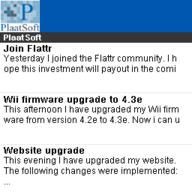 Yesterday my first Symbian application is lanched on the Ovi Store. I have created a RSS viewer for my PlaatSoft posts. If you want to download the symbian application please start the OVI browser on your mobile and type “Plaatsoft” in the searchbox. Other approach is, visit the following link

Yesterday I joined the Flattr community. I hope this investment will payout in the coming time!

Flattr is a micropayment system, which launched publicly in March 2010 on an invite-only basis, and then opened up to the public in August 2010.

Flattr is a project started by Peter Sunde and Linus Olsson. Users will be able to pay a small monthly amount and then click buttons on sites to share out the money they paid in among those sites, sort of like an Internet tip jar. The minimum users will have to pay is 2 euros per month. Sunde said, “the money you pay each month will be spread evenly among the buttons you click in a month. We want to encourage people to share money as well as content.

This afternoon I have upgraded my Wii firmware from version 4.2e to 4.3e. Now i can use the Wii shopping channel again. Also the pre-installed Homebrew Channel (version 1.0.8) and my free developed and downloaded games are still working fine. So i am a happy man!

The following changes were implemented:
– Upgrade to WordPress 3.0.1
– Upgrade all used plugins to latest available version.

PlaatSoft is a christian non profit organisation which is founded in 1996.  Our mission is to created high quality open source software for everyone.